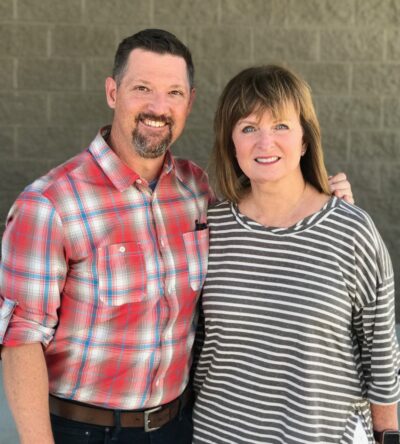 As the CEO of LifeWorks Coaching in Columbus, GA, Cathy Alford is all about celebrating personal success. She’s a life coach and a coach trainer, and in her amazing career she has been a coach trainer and college professor, a pharmaceutical sales manager, and a contributing author to two self-help books. So when it came to her own future, she did what a personal coach would advise you to do: she took charge, weighed her options, and made the decision that was right for her.

Cathy’s choice to explore Life Plan communities was a great relief to her son, Columbus resident Jonathan Payne. “Years ago, my mom realized she wanted to make decisions about her life now, rather than burden me and my sister with that challenge. I think that’s what drove her to look into The Lodge. To her – and to me – support and a sense of community are very important, and she found it here.”

According to Jonathan, Cathy has always been driven to learn: she holds an undergrad degree from the Medical University of South Carolina and a Masters in Management from Regent University. When it came to learning about communities, she looked for a place that would suit her lifestyle. Says Jonathan, “Through her hard work, my mom built up a certain standard of living. At The Lodge, she found a community with all the qualities that are important to her, and she was able to make it work.”
As a member of The Lodge’s Women’s Book Club and Bible Study groups, Cathy is already involved with her new community, and she looks forward to more social opportunities here. “Once she’s in her new home, I can picture her sitting on her back porch having coffee in the morning doing her devotional, and throughout the course of her day, I see her connecting with other residents and developing friendships,” says her son. “I also see her being close enough that she can spend more time with her grandkids – whether we go to her villa or she comes over here. Overall, I know she’ll be happy and safe, and she’ll know she made the right decision.”

Ask Gail and Nick McNair if they’re concerned about moving, and they’ll prove that they’re really pros at this. “We’ve moved 17 times in 21 years,” says Gail. “We just haven’t done it in a while!”

Married for close to 50 years, the McNairs met while they were both studying biology at Clemson University. Upon graduation, 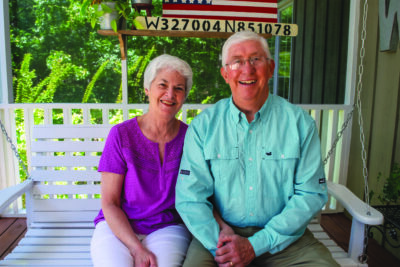 Nick went into the U.S. Army as a medical service corps officer, and his new wife joined him for an adventure that spanned the globe. Gail and Nick — and eventually, their two girls — moved from South Carolina to Georgia to Texas, Alaska and South Korea. One of their favorite deployments was Alaska, where Nick was assigned to fly a helicopter.

“I got to fly all over Alaska,” said Nick. “It was magnificent — like working for National Geographic magazine. Plus I got paid to do it!”

When Nick retired from the Army after 21 years, the family ended up in Columbus, GA, where they became the owners of a children’s gift store in the Peachtree Mall. Sanrio Surprises was a great place to teach their two daughters the importance of hard work, as both were part of the staff. After 10 years at the store, Gail and Nick retired for good, moving to a country home in Smith Station, AL. With four grandchildren, the couple knew they wanted more than their neighborhood could offer them.

Gail is very involved in volunteer activities, as she’s sewn countless blankets for the Linus Project for children in hospitals.

The McNairs have chosen a two-bedroom villa, and they’re especially looking forward to their back porch. They’re both into exercise and walking, so you’ll likely be seeing them on the trails and around the outdoor spaces at The Lodge. And if you see them this September, be sure to wish them a happy 50th anniversary, if you can catch them. After all, this couple is all about moving. 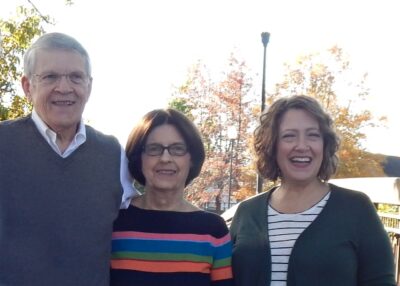 Future Lodge residents Roger and Raylene Parker know what’s important to them: faith, friends and family. When they set out to find a community, they discovered The Lodge put them in the center of it all. “The location of The Lodge is a huge advantage for all of us,” says Denise Reinhart, daughter of Roger and Raylene.

“The campus is near where my parents and my family go to church. It’s just around the corner from where I live, too, so it’s easier for me and my children to visit them.”

Originally from the Birmingham area, Roger and Raylene moved to Columbus to be closer to their daughter. For 35 years, Roger was a professor of pharmaceutical science at Samford University in Birmingham, and Raylene was a part-time pharmacist. The couple has been together for 56 years. Says Denise, “My parents have worked hard. They’ve been saving all their lives for retirement, and we want them to be comfortable and happy. They earned it! So my brother and I were thrilled that they were looking at The Lodge.”

According to Denise, Roger and Raylene decided they want to live somewhere where there’s a sense of community similar to their experiences in the University setting; and they’re already experiencing it, as members of The Lodge book clubs and social gatherings. They preferred somewhere faith-based, as they’re both active in their Church. “They also wanted to live where you can still have a lot of independence, but you don’t have to take care of the house and mow the grass and things like that,” says Denise. “My brother and I felt like The Lodge would give them all that — they would have a place to live and thrive while they are healthy and independent, and can do things like travel without worrying about the house. And if they ever need health care, The Lodge will provide options for that. There won’t be an “oh-no” moment — and that gives us all a feeling of security.”

Being among the first has its benefits:

Here’s how to make a reservation:

Fill out the form below to stay up-to-date with our progress.